The Florabel G. Mullick Travel Award was established in 2015 to honor the memory of Florabel García Mullick, M.D., ScD, F.C.A.P. The award was funded by friends and family of Dr. Mullick, and ensures that pathologists from under-served countries can attend the USCAP Annual Meeting with a travel grant of $2,500.

Dr. Mullick was a Diplomate of The American Board of Pathology in Anatomic Pathology and a distinguished graduate of the Senior Executive Program at the John F. Kennedy School of Government at Harvard University.

In 1992, she was awarded the prestigious rank of Meritorious Executive by the President of the United States. In 1993 and in 1999 she received the Distinguished Executive Award, the highest honor bestowed on a civilian in the US federal government.

Her visionary support and tireless efforts in establishing a Telepathology Program at the Armed Forces Institute of Pathology led to the formal dedication in 2005 of “The Florabel G. Mullick, M.D., Video teleconference Center.”

In 2007 Dr. Mullick became the first civilian Director of the Armed Forces Institute of Pathology.

In 2008 Dr. Mullick was elected President of the International Academy of Pathology.

Each year USCAP honors the contributions and memory of Dr. Mullick with the Florabel G. Mullick Travel Award. 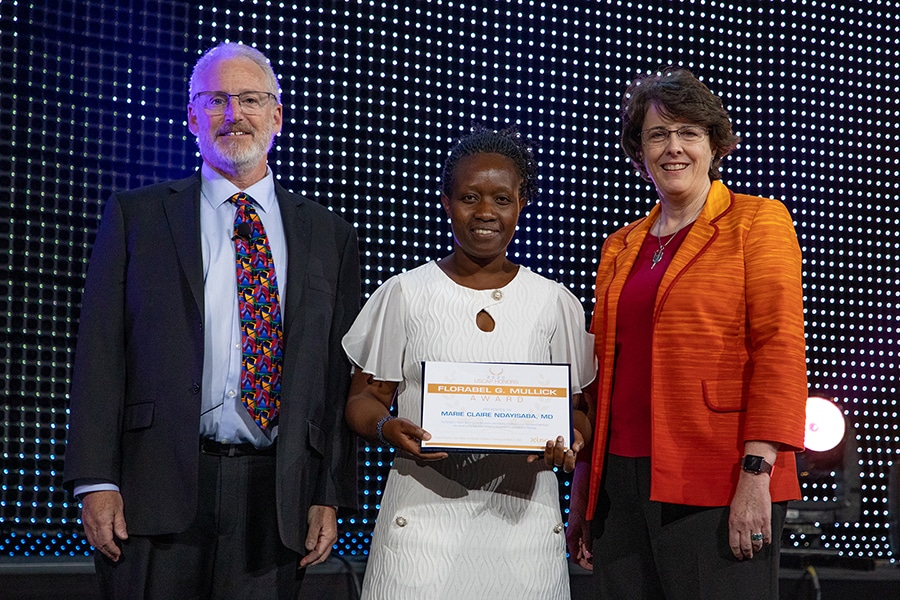 Dr. Ndayisaba is a young pathologist currently practicing at the University Teaching hospital of Kigali (UTHK), Rwanda. She joined the United States and Canadian Academy of Pathology Ambassador group in April, 2018.

Marie Claire attended medical school at the National University of Rwanda graduating in 2009. She worked 4 years as a general practitioner at Kacyiru Police Hospital, Rwanda and at UTHK. In 2015, she started her residency in Anatomical Pathology at Muhimbili University of Health and Allied Sciences (MUHAS), Tanzania and completed with honors in 2018. She has a particular interest in cytopathology, specifically fine needle aspiration cytology (FNAC). In April 2018, she had a one month-hands-on training on FNAC at the University of California San Francisco. Along with attending FNAC workshops organized by the College of Pathologists of East, Central and Southern Africa (Nairobi 2016); the University of California and MUHAS (Tanzania 2017, 2019); Royal College of Pathologists of Australasia Foundation (South Africa 2018) and through Africa Calls series of cytology teleconferences (2016-2018) she acquired knowledge and skills for FNAC and she is now a local trainer on FNAC for general medical doctors working in provincial hospitals in Rwanda and residents rotating in Pathology department at the UTHK. Other professional activities include serving as a member of Infection Prevention and Control committee, participating in research and training at UTHK, and active member of Rwanda Medical Association. Currently, Dr. Ndayisava is part of the team working on Minimally Invasive Tissue Sampling (MITS) autopsy research project at UTHK. Her career goal is to become an independent pathologist and researcher in an academic institution. Specifically, she wants to gain expertise in cytopathology that will help her to be actively involved in cancer control programs like early diagnosis and screening by using cost-effective methods in her country Rwanda and Sub-Saharan Africa at large.