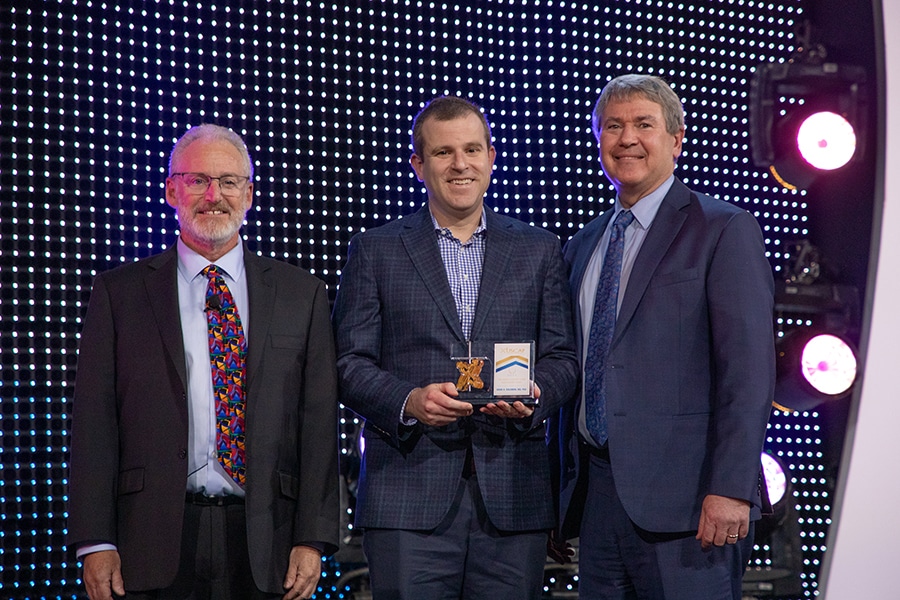 Starting early in my education, I became fascinated by human disease that results from mutations in our genetic code. It is truly amazing to me that a single mutation in our genetic blueprint consisting of approximately 3 billion nucleotides can result in muscular dystrophy, multiple cancers, or neurodegenerative disease, dependent entirely on which nucleotide in the genome is affected. While I cannot pinpoint the specific moment at which I decided to devote my career to the study and treatment of human cancer, I am certain the reason is my fascination with cancer’s genetic underpinnings. As we now know, cancer is the result of the combination of inherited genetic alterations and acquired somatic alterations over time, either resulting from spontaneous errors during many rounds of DNA replication or in response to genotoxic stress such as ultraviolet irradiation or tobacco smoke. When the combination of these inherited and acquired alterations causes sufficient activation of oncogenes and inactivation of tumor suppressor genes, the result is uncontrolled cell growth, invasion, and metastasis. We have now entered the era of precision medicine. In terms of cancer, precision medicine equals using genomic analysis to accurately diagnose and molecularly subtype tumors, evaluating affected patients for inherited tumor predisposition syndromes, and identifying the genetic alterations responsible for tumor growth that can be targeted with specific small molecule inhibitors or antibodies.

During my four years at the College of William & Mary, I performed research in the lab of Dr. Margaret Saha defining the spatiotemporal development of neurotransmitter systems within the amphibian brain. I spent my summers during my undergraduate training in the multiple sclerosis lab of Dr. Timothy Vartanian at Harvard Medical School studying the regulation of myelination in the developing central nervous system. After completion of my undergraduate degree, I worked for two years at the University of Cincinnati College of Medicine in the lab of Dr. Erik Knudsen studying regulation of cell growth by the retinoblastoma tumor suppressor which led to several first author publications, the most prominent of which describes the discovery of a novel oncogenic splice variant of cyclin D1 which we termed cyclin D1b (Solomon et al. J. Biol. Chem. 2003). It was these experiences that solidified my interest in a career in biomedical research and prompted me to pursue MD/PhD training at Georgetown University.
For my PhD thesis research, I chose to investigate the genetics of glioblastoma in the lab of Dr. Todd Waldman. I carefully banked more than 100 human glioblastoma samples, purified genomic DNA, and hybridized to Affymetrix copy number microarrays in the hopes of identifying new glioblastoma oncogenes and tumor suppressor genes. I identified recurrent homozygous deletions of the CDKN2C and PTPRD genes and subsequently performed follow-up experiments that delineated these genes as novel glioblastoma tumor suppressors. Based on my finding of recurrent CDKN2C and CDKN2A/B deletions as well as amplification of CDK4, it became clear to me that targeting this pathway represented a new rational therapeutic strategy for glioblastoma.

In order to test this, I worked with Pfizer to obtain access to their new first-in-class CDK4/6 small molecule inhibitor, PD-0332991 (now called palbociclib). This drug demonstrated remarkable efficacy both in vitro and in vivo in an orthotopic xenograft model. This study led to initiation of “A phase II study of PD-0332991 in patients with recurrent Rb positive glioblastoma” (ClinicalTrials ID NCT01227434).

During my time at Georgetown, I gained expertise in the genetics of brain tumors and sought an opportunity to apply this knowledge in the field of diagnostic and translational neuropathology. I thus completed Anatomic Pathology Residency and Neuropathology Fellowship at UCSF. Starting while I was in-training as a neuropathology fellow, I helped design, validate, and implement a next-generation DNA sequencing panel (the UCSF500 Cancer Panel). Since the clinical implementation of this targeted sequencing panel in 2015, I have been responsible for supervising, reviewing, and reporting all CNS tumor cases (n=1,500 to date). In addition to all brain tumor cases resected at UCSF, our sequencing panel has become the reference testing platform for brain tumor cases from numerous medical centers around the country including Miami Children’s Hospital, Utah Children’s Hospital, Children’s Hospital Oakland, etc. A precision medicine clinical trial of the Pacific Pediatric Neuro-Oncology Consortium (PNOC008) is utilizing the UCSF500 Cancer Panel as the genomic testing platform, for which I am leading the genomic data review and interpretation. I am next working to develop and implement genome-wide methylation profiling as an ancillary diagnostic tool for tumor classification and subtyping at UCSF.