The Maude Abbott Lecture is a prestigious scholarly and/or scientific presentation by a revered authority in pathology who has contributed, and continues to contribute, to the advancement of pathology in the areas of teaching, research and clinical practice. The selected individual must be capable of giving a lucid and erudite lecture relating to contemporary pathology and should be a member of USCAP. Designation as the Maude Abbott Lecturer represents one of the most important USCAP honors.

The lecturer is selected at the interim meeting, by vote of the Board of Directors, from three candidates proposed by the Executive Committee. The lecture is delivered at the Annual Meeting approximately 18 months later. 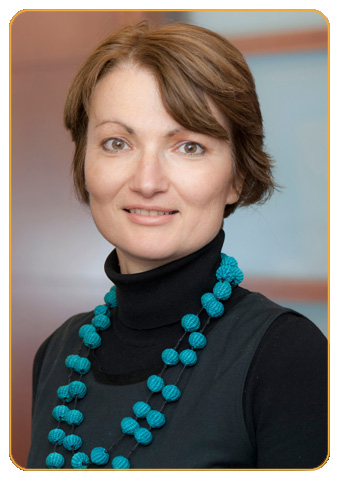 Dr. Antonescu’s career as a sarcoma pathologist at Memorial Sloan Kettering Cancer Center started in 1999 under the mentorship of two historical figures, Drs. Andrew Huvos and James Woodruff, who shaped her aspirations toward an academic career in studying bone and soft tissue tumors.

In 2004, as a result of a KO8 award, she started her own sarcoma research laboratory, dedicated to the detection and molecular characterization of diagnostic and prognostic markers in soft tissue sarcomas. Reflecting her prior training in molecular biology, her research has been focused in two main directions: KIT oncogenic signaling in the pathogenesis of GIST and gene fusion discovery in the characterization of new pathologic entities.

During the past two decades her lab has cloned numerous novel gene fusions that have impacted the classification of soft tissue tumors. Dr. Antonescu’s sarcoma research laboratory also served as an invaluable resource in mentoring young investigators and pathology fellows with a special interest in sarcoma pathology and molecular biology.

Currently, she serves as the Director of Bone and Soft Tissue Pathology and oversees the pathologic evaluation of sarcoma patients treated at Memorial Sloan Kettering Cancer Center. She runs a busy personal consultation practice and enjoys teaching her talented fellows. Dr. Antonescu is the Co-Leader of a GIST research project as well as the Co-Director of the Administrative Core and Director of the Biospecimen Repository Core for the Soft Tissue Sarcoma SPORE. She is also the Co-Director of the recently instituted MSK Sarcoma Center, an integrated multidisciplinary group of basic and clinical researchers.

Dr. Antonescu is grateful to all her colleagues at MSK for their relentless support over the years for both her clinical and research endeavors. She believes that this award is also a testament to the incredible collaborations over the years with many of the USCAP community, which have allowed the success of her research to come to fruition.