The Benjamin Castleman Award is granted for an outstanding paper in the field of human pathology published in English. Selections made by the Benjamin Castleman Award Committee will be based on the merit of the submitted paper, not on the entire career of the author. Please do not include additional supporting papers. Any optional information or letters from sponsors should be focused on the paper, not on the author’s qualifications. The 2020 award will be based on papers published during the twelve months preceding the application deadline. The subject may represent any topic in pathology, but must be directly relevant to human disease. On papers with multiple authors, only one author is eligible, and only one paper per author may be submitted.

The awardee must be a pathologist or a pathology resident or fellow who has not yet reached their 40th birthday at the time the paper is published.  Papers by pathology trainees are encouraged. The prize will consist of a check for $1,500 and a certificate. Funds for travel are not included and the awardee does not have to be present at the Annual Meeting. 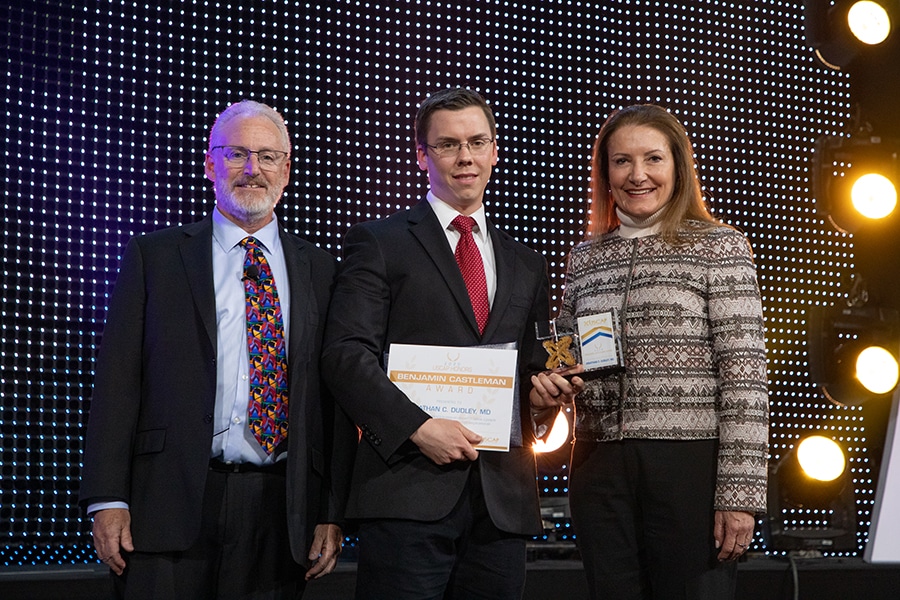 Dr. Dudley received his medical degree from the Johns Hopkins School of Medicine, where he developed an interest in molecular diagnostics. At Johns Hopkins, he worked with Dr. Ming-Tseh Lin, director of the Molecular Diagnostics Laboratory, to conduct quality assurance studies on the lab’s pyrosequencing assays for KRAS and BRAF hotspot mutations. This work highlighted predictors of KRAS assay failure, resulted in a redesign of the lab’s clinical assay for BRAF variants, and led to two first-author publications in Archives of Pathology & Laboratory Medicine (featured cover) and Molecular Diagnosis & Therapy. Dr. Dudley then began residency in Anatomic Pathology at the Massachusetts General Hospital (MGH), where he worked with Dr. John Iafrate and Dr. Martha B. Pitman, directors of the Center for Integrated Diagnostics and of Cytopathology, respectively. Together, they demonstrated that MGH’s solid tumor genotyping panel could be used as an ancillary test for malignancy in pancreaticobiliary brushing specimens. This work resulted in the clinical implementation of a molecular assay for pancreaticobiliary cancer at MGH and a first-author publication in the Journal of Molecular Diagnostics.

Dr. Dudley then moved to Palo Alto, CA to join his wife Dr. Sara Dudley, a radiation oncology resident at Stanford Hospital. At Stanford, he completed his final year of Anatomic Pathology training, a fellowship in Molecular Genetic Pathology, and was inducted into the Alpha Omega Alpha honor society. Concurrent with his clinical training, he worked in the lab of Dr. Maximilian Diehn and Dr. Ash Alizadeh, who had previously developed a hybrid capture workflow for detecting cell-free tumor DNA from plasma, called Cancer Personalized Profiling by Deep Sequencing (CAPP-Seq; described in Newman et al., Nature Medicine, 2014; Newman et al., Nature Biotech, 2016). Building on his work at MGH, Dr. Dudley hypothesized that CAPP-Seq could be adapted to detect cancer from cell-free DNA in the supernatant of urine cytology specimens. After extensively re-optimizing the assay workflow to meet the unique challenges posed by these specimens, Dr. Dudley and colleagues applied it two cohorts of patients with bladder cancer. Across their cohorts, they were able to significantly outperform the sensitivity of cytology, cystoscopy, and UroVysion for the detection of bladder cancer while maintaining cytology’s high specificity. Dr. Dudley received the Young Investigator Award from the Association for Molecular Pathology for this work, which also resulted in a first-author publication in Cancer Discovery.

After completing his clinical training, Dr. Dudley returned to the Johns Hopkins Hospital, where he is currently a postdoctoral fellow in the lab of Dr. Bert Vogelstein. His ultimate goal is to combine clinical work and research in molecular pathology, with a focus on developing novel molecular diagnostic approaches for pathology specimens.